Mercedes-Benz has a habit of producing stunning concept cars, but few are as striking as the AMG Vision Gran Turismo. 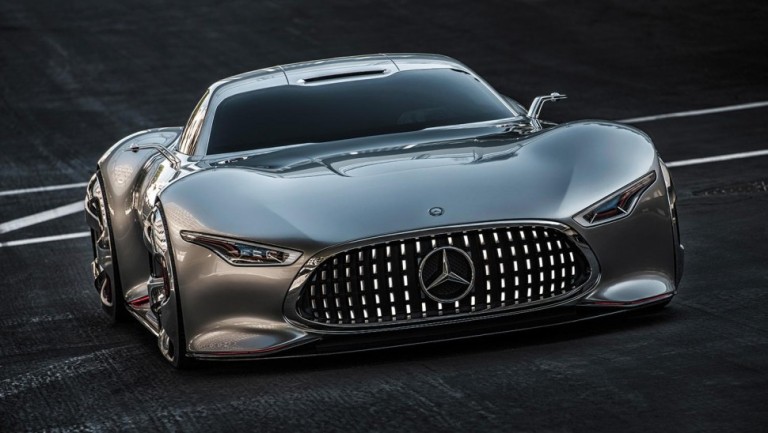 Defined by extreme proportions, sexy contours, and high-tech gadgetry, Gran Turismo was developed to coincide with the 15th anniversary of that racing simulator franchise . The concept features a blend of old and new Benz traits: like the SLS AMG GT, the AMG Vision Gran Turismo boasts a long hood that flows seamlessly into a compact greenhouse, while also borrowing the SLS’ gullwing doors.

Broad shoulders and bulging wheel wells add drama, while red glowing contour lines on the lower part of the car create a cool and futuristic effect.

It gets even better inside the cabin, which was inspired by a Formula One cockpit. Red sport seats offset the black flooring, and the instrument panel appears to flow smoothly into the gullwing doors.

Above the steering wheel is a floating glass surface, which displays important information such as speed and operating temperature. Rocker switches are located on the center stack and in an overhead compartment, giving the cabin an overall jet-like feel.

While we’d certainly love to give this thing a go in the real world, we’d also settle for some virtual seat time when it’s integrated in the new GT6 through online updates. The AMG super sports car will be the first of the “Vision Gran Turismo” series of vehicles unveiled in the game.