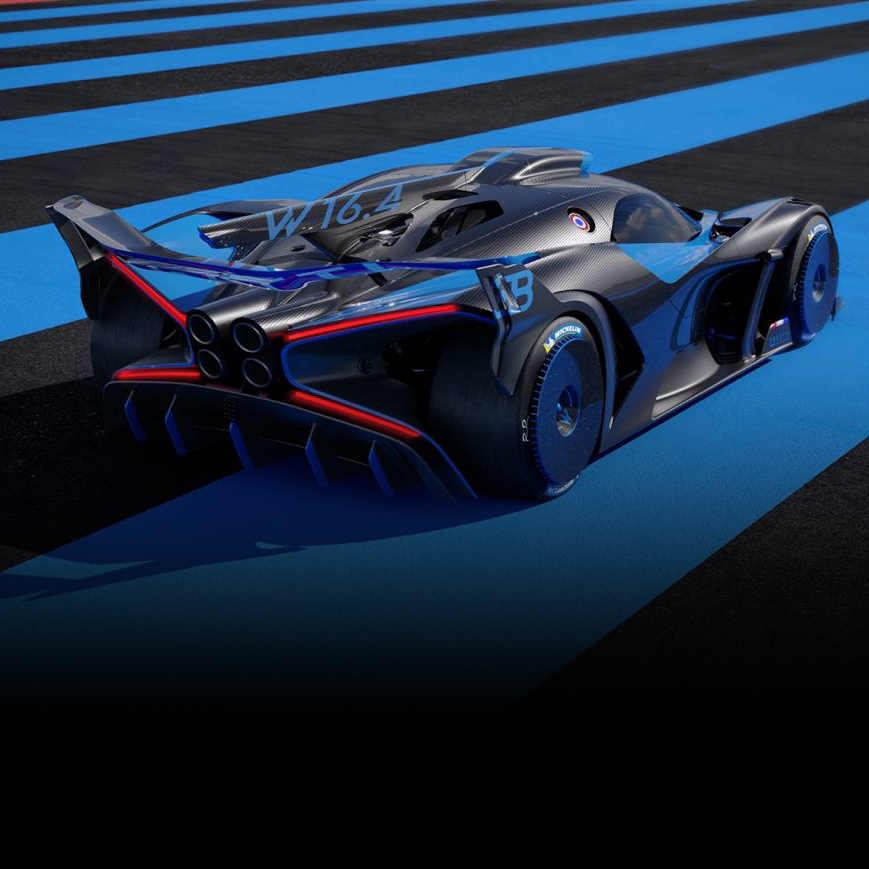 The experimental study of the Bolide is a track-oriented hyper sports car featuring a W16 engine derived from series production as powertrain combined with a minimal body for maximum downforce. The combination of 1,850 PS and 1,240 kilograms dry weight ensures an unbelievable weight-to-power ratio.

The video below follows Achim Anscheidt, Bugatti Director of Design, as he shares how the ethos of how form follows performance, by stripping a Bugatti Chiron of all the luxury comforts.

We then hear how Bugatti reposition the driver in the Bolide and create an ultra minimal and ultra performance based exterior, with a shell designed specifically for the race track.

Bugatti states: The concept is designed with an 8.0-litre W16-cylinder engine with 1,850 PS and 1,850 newton-metres of torque is at its heart. Bugatti has designed the drive specifically for use on the racetrack and has optimised the engine and gearbox in particular for higher engine speeds. Among other things, this includes dethrottling the intake and exhaust system to achieve an even faster, more spontaneous, and extreme response characteristic.

The Bugatti Bolide achieves figures that are almost on par with Formula 1 while its top speed is well above 500 km/h – without compromising maximum handling and maximum agility.

“The Bolide is the ultimate answer to the question of what if Bugatti built a track-focused hyper sports car that met the FIA’s safety requirements. Designed around the W16 powertrain with the minimum body structure and unbelievable performance data. The result: the smallest possible shell for a breathtaking performance vehicle that allows the W16 to truly come into its own,”

explains Stefan Ellrott, member of the Board of Management of Bugatti and Head of Technical Development.

“All of Bugatti’s expertise has been condensed into the Bugatti Bolide. It is therefore an innovative information source for future technologies. The Bolide is thus more than just an intellectual exercise.”

“We asked ourselves how we could realise the mighty W16 engine as a technical symbol of the brand in its purest form – with solely four wheels, engine, gearbox, steering wheel and, as the only luxury, two seats. Important aspects of our considerations were fine-tuning our iconic powertrain without any limitations as regards the weight-to-power ratio. These considerations resulted in the Bugatti Bolide. An uncompromising experiment, a thoroughbred, a Pur Sang that, in its brute exclusivity, impresses above all with high performance, low weight, and a driving experience in a whole new dimension. Driving the Bolide is like riding on a cannonball.”

As with other Bugatti vehicles, the Bugatti design team also makes use of a colour split in the Bolide. Compared with other models, the share of visible carbon parts is increased by up to 60 percent. Only around 40 percent of the surfaces are painted – in a re-interpretation of the historic French Racing Blue.

The question now on everyone’s lips is: will the Bugatti Bolide will go into series production? We will be certain to let you know.